Identifying the baby’s gender is not be a big challenge in the modern era of science and technology, thanks to the support from such the great machines like Ultrasound and CT Scan being widely spread all over the globe. Take a time to think about the times when humans didn’t even know the basis of conception and birth. Thus, during these dark ages, the Chinese found a calendar to guess the sexes of the children before they were born. Actually, the calculations relating to the predictions have proved right in some situations, making it inevitable to suppose that the calendar owns some truths regarding its findings. Up to now, many couples are really aware of the calendar, either just for fun or in reality, for predicting their babies’ genders before they were born.

The Chinese Gender Prediction Chart and Its Brief History

We all know that China has a past of developing the patriarchal societies, tended to favor the birth of boys over girls. Why? The reason is very simple: because boys were believed to carry forward their family legacy. Furthermore, China has been the agricultural society, so having more males meant more hands to work on their fields and bring in more money.

Besides, the girls had a tendency to stay at home until they reached the nubile age (around sixteen or seventeen), and were described to be an expense to the family. Additionally, according to the Chinese’s belief, only boys might carry on the family farming/business and inherit the ancestral property. As a result, the distinction between these 2 genders could have been one of the primary causes for the development of the Chinese Gender Chart.

This calendar – Chinese Gender Predictor Calendar, also called as The Chinese Birth Chart or The Chinese Lunar Calendar – is considered as one of the oldest methods to guess the sex of a baby prior to its birth. Interestingly, this 700-year-old chart was discovered in a royal tomb near Beijing and devised by an ancient Chinese scientist.

Legend has it stated that this special chart is totally able to predict the gender of an unborn child based on the mom’s age, coupled with the month when this child was conceived. Depending upon an unscientific survey of the Internet pregnancy message boards, the calendar has a pretty high rate of precision, but we only may know whether the chart was right or wrong after our baby is born. Here is its brief instruction:

For more details about this article “How To Use Chinese Gender Chart Correctly?” don’t be shy to submit your concerns in the box below.

How To Use Chinese Gender Chart Correctly?

Getting pregnant is what almost all women desire to gain after a happy period of expected marriage. It is lucky that you now have a baby developing in your body and you are so curious about the baby’s gender that you can’t stand waiting for the time of an ultrasound scan. Want to know whether […] 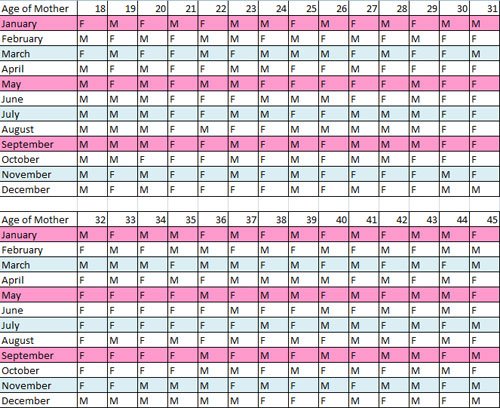 Looking for an ancient tool that can foretell the gender of your unborn kid? Also crave for another tool to select the baby’s sex for the most advantageous intercourse? Needless to look further since all things you need have been incorporated into the Chinese Birth Chart! Have you ever heard anything about the mysterious Chart? […]

What Is The Most Accurate Chinese Gender Predictor Chart?

As the common belief, every expectant mother desires to know ahead the fated gender of their future kids who are about to join in their marital rooms. Ever considered the ways that moms predict and prepare themselves for the forthcoming children? Not to mention the scientific method of ultrasound scan or genetic test, there exists […]